Our Review of Mage UnConference Germany 2022

The whole event started in a bit of a sad way for us, because even though we planned to join with four people, only Simon could make it for various reasons. Plus, we could not attend the hackathon right before the main event, which led to some FOMO for us. For those unfamiliar with the acronym FOMO: It stands for Fear Of Missing Out and seems to be a biggish term in the community in the last years. At least I read it on Twitter during almost every Magento event.

One very big or even the main part about an event, especially an UnConference, is all the conversations. Hence, the parties play a big role. The preparty was again at “Lokal Alte Feuerwache”, which served traditional Kölsch next to Asian food. After long and nice talks, a small group had a little nightcap at the Suderman cocktail bar nearby. That one of us searched for his jacket the whole next day calling various locations just to find it in his hotel wardrobe in the evening says a lot about the night ;-)

For the main party Saturday night, the locations changed quite a bit over the last years. While it was in a rather simple, traditional pub last time, it was at the very fancy “Rheinterrassen” this time. I guess many of us had the impression that it was a bit too fancy for our community, but without any doubt, the food was excellent. In the end, the security guy needed to kindly tell us that the location closes now, which speaks for itself… A small group with people from various companies like maxcluster, e3n, basecom and netz98 did not end the party there, but continued it in the old city center…

On Saturday, the sessions started a bit later at 12, because we first had to gather, introduce and vote on all the topics. In the end, we had a nice schedule of very different sessions: 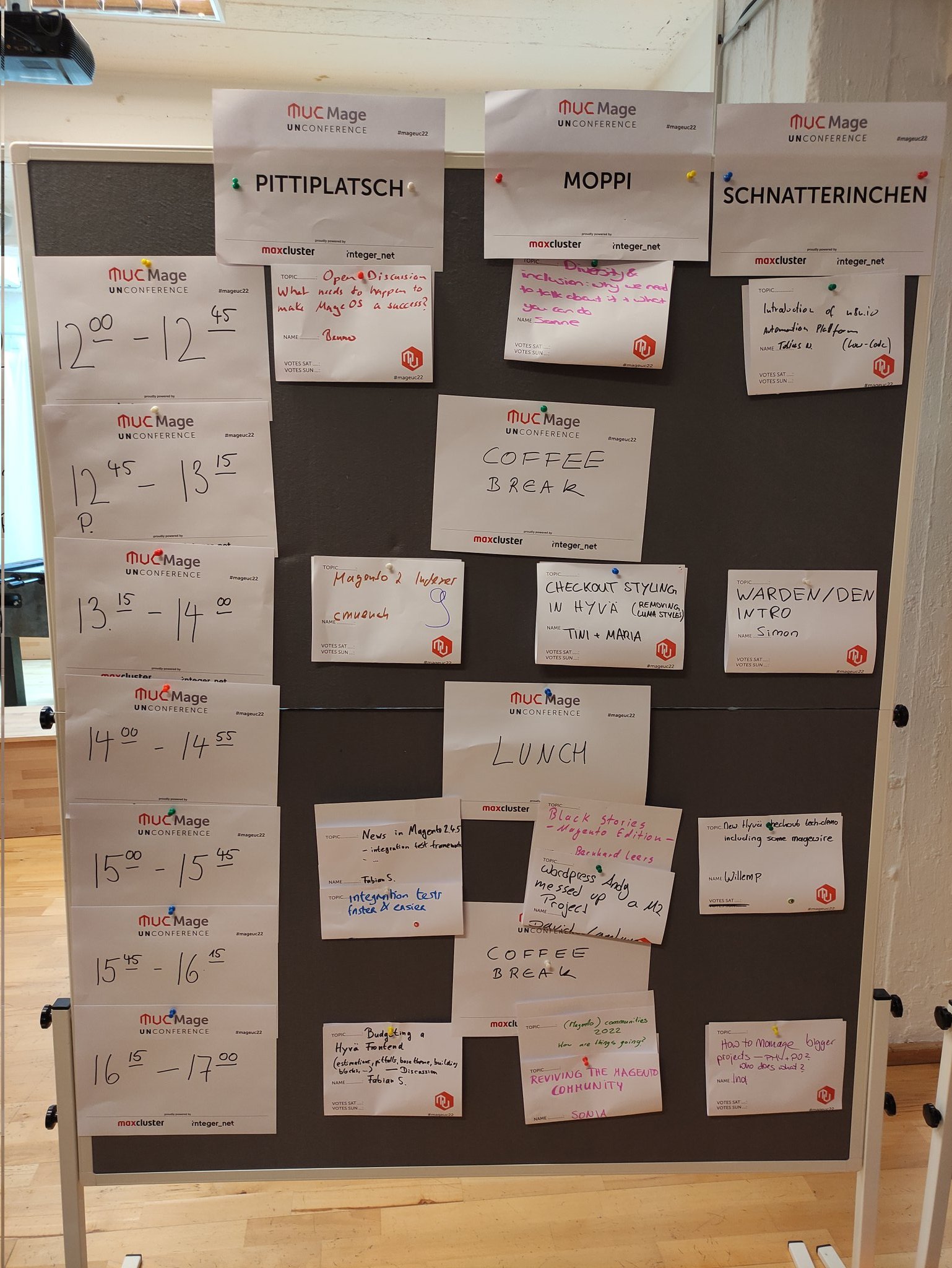 There is an issue with UnConference schedules - especially if you are alone: You have to choose which sessions you miss. Even though I wanted to participate in the Mage-OS discussion, I attended the n8n talk by Tobias Niebergall from e3n. Because we use the workflow automation tool n8n ourselves since a few months with a few simple automations, I wanted to check how others use this tool, which led to some interesting exchange of experiences. One interesting use case Tobias presented: They transfer time entries from the Jira time tracking tool Tempo Timesheets to another time tracking tool called clocko:do without writing a single line of code. Afterwards, I was supposed to give a talk on Warden / Den , which we spontaneously moved to a coffee break in order to be able to attend the talk by Christian Münch from netz98. He did not disappoint and held a very technical talk on Magento 2 indexers, which index data to index tables each time you reindex the indexes. You get the point.

After a delicious lunch discussing his awesome Extension Checker with Jisse Reitsma from Yireo, I heard some news, tips and tricks about Magento 2 integration tests by Fabian Schmengler from integer_net and Jisse. While Jisse mainly talked about his integration testing helper , Fabian introduced the integration test changes from Magento 2.4.5 . The last session of this day for me was about the Magento community: A vibrant discussion about the past, the present and the future. In my eyes, the main outcome of the debate was that we need to work on making this community a positive, active and growing place (again) - especially for newcomers.

The second day started a bit earlier with fewer participants, but with the same positive vibes. The schedule was packed again: 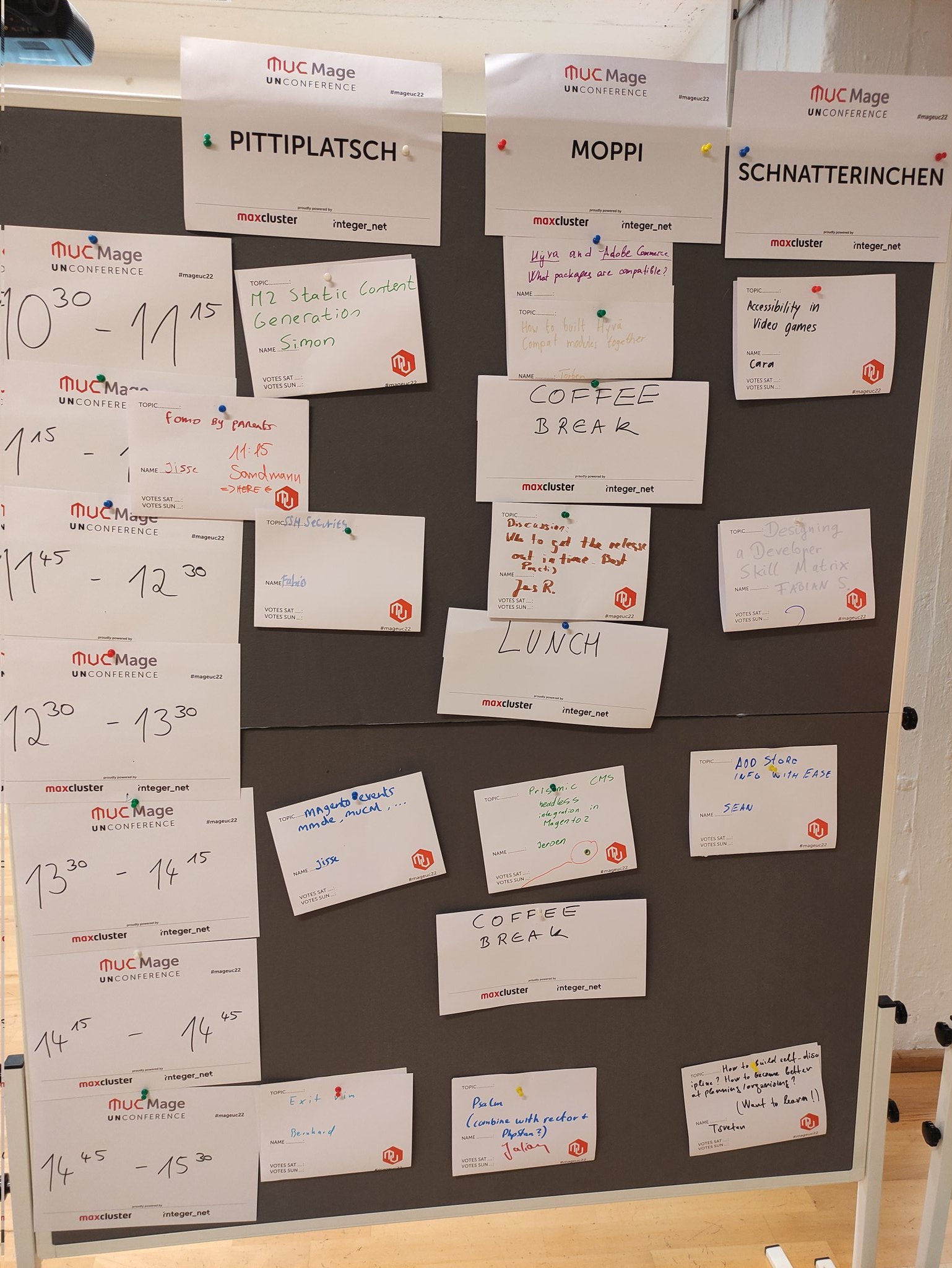 I myself started with a talk on Magento 2 static content deployment, which was (positively!) crashed by Jisse. Since the audience was rather experienced, this quickly led to an interesting discussion how the whole process can be optimised. The whole topic could easily fill a separate blog post, but if you want to speed up the process, check the following points:

Afterwards, I heard a very interesting talk about SSH security from freelancer Fabio Ros followed by another delicious lunch, during which I caught up with Christian Philip from integer_net - especially discussing the current PayPal Checkout situation.

After lunch, one group discussed Magento events in the courtyard. It showed that events are not easy to plan at all, and you have to consider a lot of tradeoffs. The most exciting thing about this discussion was that there may be a Meet Magento Germany one day again… The last session before my departure was a talk by Julian Nuß from integer_net mainly about Rector, but also about PHPStan and Psalm.

If you want to have a more diverse review of the event with much more images, check out the #mageuc22 hashtag on Twitter or the @MageUnConf account . There are lots of nice pictures, funny moments and also interesting technical information and discussions.

We hope that in-person events are now slowly going back to normal. It is just something completely different compared to virtual events. Virtual events are better than no events, but nothing can beat the in-person communication and interaction ♥

We are already looking forward to the next UnConference, which will be Mage UnConference 2023 in the Netherlands from July 12 to 15. The venue is Fort aan de Klop in Utrecht again, which already proved to be a very nice location in 2016. We booked three tickets for the CustomGento team already. Do not wait too long and get your tickets now if you also want to sleep directly at the awesome fortress.

Even though we are very much looking forward to the Dutch UnConference, we really hope there will also be a German UnConference in 2023 again…